Skip to content
The Changing World of Immigrant Entrepreneurship discussed at the 129th annual meeting of the American Historical Association in New York Cityr2WPadmin2018-08-16T20:27:35+00:00

The German Historical Institute began the new year with a panel, organized by Benjamin Schwantes and Uwe Spiekermann, “The Changing World of Immigrant Entrepreneurship: Three Centuries of German-American Experience“ on January 2 at the 129th annual meeting of the American Historical Association. While earlier panels of the GHI’s Immigrant Entrepreneurship Project were dedicated either to biographical case studies, to individual branches or time periods, or to comparisons of other nations and cultures, the AHA-panel is the starting point of a series of panels and conferences dealing with more general questions of business, social, and cultural history and summarizing the research project.

Benjamin Schwantes, research associate of the Immigrant Entrepreneurship Project, opened the panel with a nuanced discussion of “German American Capital, Communication, and Transport Networks in the Eighteenth and Nineteenth Century.” Based on a large number of biographical case studies, he used modern network theories to analyze the social and political-economic relations among producers, consumers, and distributors of Europe, America, and Africa. With this, he rejected traditional concepts of mercantilism, which do not really refer to the entrepreneurial actors and their crucial contribution for the transatlantic transport, the capital flow, and the spread of information and knowledge. Although the period from the 1720s to the 1840s was overshadowed by many crises and wars, the sheer persistence of these networks across time and space and the entrepreneur’s ability to reconstitute the networks quickly reflects the importance of personal relations, of different national backgrounds, and of religion and ideology.

Uwe Spiekermann, general editor of the Immigrant Entrepreneurship Project, analyzed a different institution: Family businesses. Discussing “The Rise and Decline of Family Business: German American Immigrant Entrepreneurship, 1850-1920s” he used two examples, the Spreckels and the Uihlein families, to examine in depth the use of individual family members and family networks for business purposes. He argued that the success of German-American immigrant entrepreneurs was not only related to innovation and knowledge transfer but also a result of a specific social form of immigrants’ organization. Although families were not only free actors but also strongly affected by their environment, it is – according to Spiekermann – important to combine the impersonal logic of a Chandlerian economic and business approach with the social and cultural logic of individual families. The presentation was finished with a strong plea to broaden our understanding of the logic of change in firms and societies with the help of a more qualitative biographical perspective on families.

Jan Logemann, assistant professor at the University of Göttingen and former research group director of the GHI’s project “Transatlantic Perspectives: Europe in the Eyes of European Immigrants to the US, 1930-1980” switched to the interwar period, discussing “Emigrés as Transnational Knowledge Entrepreneurs: Alfred Politz, Ernst Dichter, and Mid 20th-Century”Consumer Engineering.” He first gave an overview of the consumer engineering approach, which tried to stimulate demand by industrial design, psychologically-infused marked research, and a network of professional consulting firms, adding examples of the crucial impact of immigrants from the former German and Austro-Hungarian empires in the late 1920s and 1930s. Logemann argued that these transnational knowledge entrepreneurs established firms to give added authority to their way of practicing social sciences and aesthetics. In addition, they offered transnational translations increasingly important for market penetration in Europe after World War II. Similar to Schwantes, Logemann stressed the relevance of networks—now of emigrés—for establishing transnational market relations and for developing modern consumer societies in the West.

While Spiekermann and Logemann still used individual examples to underscore their general theses, Dan Wadhwani, similar to Schwantes, tried to use all the biographies of the Immigrant Entrepreneurship Project’s volume 5 for a broader endeavor entitled “Immigration and Entrepreneurship in the Postwar United States: Contextualizing the German Immigrant Entrepreneurship Biographies.” Wadwhani, associate professor at the University of the Pacific and editor of the volume 5, started with some general questions on how to maintain agency of historical actors—immigrant entrepreneurs—in context without returning to Whig history of individual success stories. He used Georg Simmel’s 1908 essay about the stranger as an ideal type, who is an integral part of multiple contexts of life and able to introduce change although embedded in context. In relation to entrepreneurship and economic change, strangers—and this included most German-American immigrant entrepreneurs—had intelligence in trade unavailable to locals, imported new skills, and were able to introduce new perspectives in producing the same objects. Seen from this perspective, immigrant entrepreneurs were innovators at the intersection of contextual multiplicities and must be understood as social figures, which can provide broader insights for understanding immigrants and migration.

In her comment, Susanna Fellman, professor of economics from the University of Gothenburg, thanked the speakers for nuanced and pronounced papers. In her general remarks, however, she questioned several key terms and pre-assumptions of the project, namely the relevance of identity for “immigrant entrepreneurship” and the relevance of the multiple perspectives for the second or the third generations. She argued in favor of adding the perspectives and experiences of those immigrants who were unsuccessful.  Finally, Fellman gave detailed and surely helpful comments to each presentation. A brief but lively discussion with the audience followed. 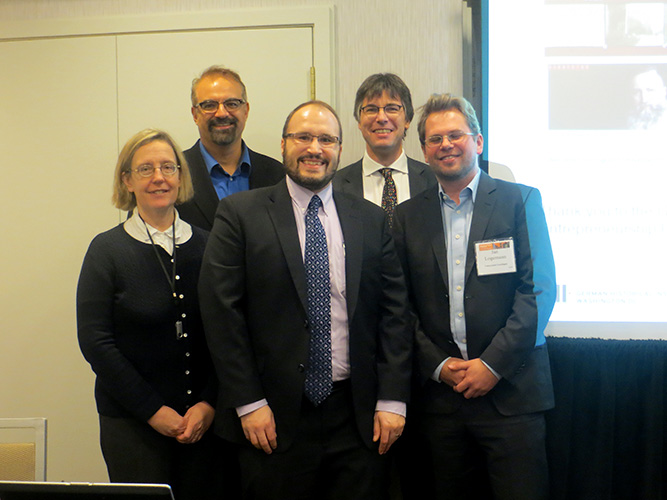 Warning: count(): Parameter must be an array or an object that implements Countable in /home/customer/www/r2test4.com/public_html/wp-content/plugins/ecms/public/ecms-entry-content.php on line 281

This project is sponsored by the Transatlantic Program of the Government of the Federal Republic of Germany through funds of the European Recovery Program (ERP) of the Federal Ministry of Economics and Technology.